My Recent Trip To Tiptonville


Well I made it back to Atlanta in one piece.  Eight hour drives should not be so difficult, but I guess the older we get the harder everything becomes.  I stopped in Nashville on the way last Saturday and had a really long lunch with Amanda who traveled down from Louisville just for the visit; book talk, blog talk, general how-you-doing-talk.  All is well.

Sue and Virginia Hayes were off on Sunday morning for a short visit with Barbara Markham and others.  They usually drive all the way to North Carolina for this twice a year trip, but this time they all met at Montgomery Bell State Park for a change of pace.  All enjoyed the trip but I must convince Sue to take longer breaks from her "Mother Sitting" role.  My all-to-rare trips to take over that job have shown me what an intense activity that can be. You can visit an older post to see what "a day in the life of Catherine LeDuke" is like.  Nothing has changed much.  We are all just a little slower as we move from room to room.


I had intended to take Mother to church Sunday morning, but we just couldn't seem to get into "getting ready" mode; dressing, pill taking, breakfast eating, and assorted other tasks just kept taking too long to accomplish.  I was just too out of practice that first morning on duty so we skipped Church and Lakeview Dining.  But I soon found out that you can't get away with anything in that town.  (Or can you?)
One of the nice, concerned Church Ladies called Sue on her cell phone to ask if Miss Catherine was all right since she was not in her pew that morning.  Sue said she was fine when she left that morning, but she would check to be sure.  Soooooooooooo.  I got a phone call from the warden making sure that all was well.  "Yes", I said.  "I am just a little rusty but I promise I'll do better the rest of my time here."

I really only had three days with Mother this trip; Sunday, Monday, and Tuesday.  Sue returned around noon on Wednesday and after giving her a rundown on things, I hit the road back to Atlanta.  Sue had given me a short list of chores to take care of and I managed to check everything off; I even managed to remember that Wednesday morning was the day to take the garbage can to the curb. 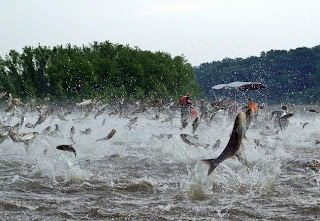 I suppose the most interesting part of my short visit was going out for a drive each afternoon and getting the required Dairy Queen ice cream cones; one small and one large.  Each day we headed a different direction for about an hour or so.  The river is still flowing south even though the water is too high to drive all the way across the levee, and the new spillway appears to be completed but is not as interesting as the old one.  The old one by the way, still has lake water flowing over it and the newest "lake activity" is to sit in your car and watch the "Asian Carp" trying to jump back up the flood gates to get back into the lake.  It is a real shame to see that this invasive fish is starting to take over our beautiful Reelfoot Lake.  Rain and high water had cut off our "rabbit hunting" airport camp ground road but the trip to the Upper Blue Basin still made for a nice drive. 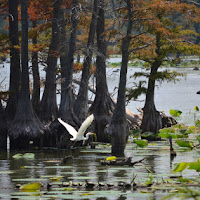 Late afternoon is devoted to rest and rummaging.  I managed to find time to go through another 10 or 20 photo albums and steal a big bag of pictures that may someday show up on a future blog posting.  I also found a couple of poetry books that I had not seen before.  One was given to "Miss Catherine" by Marian Burnett in 1958.  (Dedicated readers of this blog might remember Marian from her appearance in the "Reflections While Standing Before the Lincoln Memorial" post.) In the book was the card she'd included with the book, with some really nice words of tribute for Mother.  Mother's response was typical: "Did Marian really say those nice things about me?"

The book was called "Rainbow."  It is a collection of poems, sayings, and short stories.  Very similar to "Leaves of Gold," an anthology book of poems that was popular in the 1950's.  We spent an hour or so each afternoon reading through this book.  The nice thing about the experience was that I didn't have to worry about whether I was repeating the same parts of the book.  Each day was "A New Day" for Mother and she was appropriately thrilled at hearing the same poems again and again.  I left that book on the table near her chair just in case anyone comes by and wants to see her "light up" with a big smile.  Don't worry, she won't scold you if you mispronounce a few words or fail to get the "meter" just right. 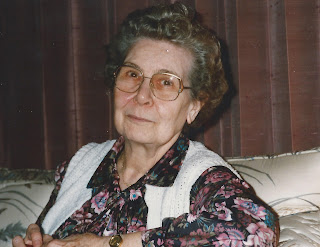 Nighttime comes a little earlier now.  After a supper of soup and sandwich, a final breathing treatment we refer to as "puffing", and a short look at Wheel of Fortune we begin the "going to bed" process.  Details are little-changed from those described in an earlier posting but I did enjoy adding one minor touch.  When all is finally done and laying down is just about all that remains, I usually help mother get her hearing aids placed in their nighttime spot.  This time though, I told her not to take them out until I had a chance to tell her how much I loved her and how important she was to so many people.  I told her I wanted to be sure she could hear what I was saying.  This of course, usually brought on a few tears, but she always said she loved me too, and thanked me for all I had done for her that day.

Once down, Catherine LeDuke was quickly asleep for another night.   Then I could leave her alone and go wipe away those tears I just mentioned.