*This essay was submitted in 1959 as an entry to a national contest on the theme, “Reflections While Standing Before the Lincoln Memorial” sponsored by the American Association for State and Local History, in conjunction with Broadcast Music, Inc. (BMI), as part of a celebration of Abraham Lincoln’s 150th birthday.  The grand prize was $500 and publication in This Week magazine. Catherine LeDuke’s essay, written as a letter to one of her former students, won 1st prize for the state of Tennessee and second overall.  We submit it to you today, on Lincoln's 204th birthday. 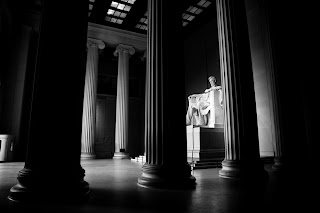 Well, here I am again before the Lincoln Memorial, just where we stood together, you and I, after we had walked apart from the others of your class three years ago.  Do you remember as I do? There were six of you students and two teacher-sponsors who had refused, tired as we were, to cut short our tour of the city because of the rain. We never regretted it, did we?  Indeed the rain itself may have provided the privacy that let us have the Lincoln Memorial for our very own that afternoon.

The eight of us stood together before Lincoln’s statue and gazed into his eyes and seemed to feel a message from him across the years.  Then we turned to the inscriptions on the walls and several of you read in unison first one and then the other of those immortal speeches.  You were good readers, and the words so familiar to us seemed to come to life as we stood there reading, listening.  Perhaps because we were a bit abashed at so much emotion, we broke into smaller groups of two or three and walked quietly out of the building onto the colonnade that overlooks the city.  Across the mall we saw the Washington Monument and the Capitol.  Pieces of our history seemed to fit together somehow as they never had before, just reading from a book.

Then you turned to me and spoke, partly as pupil to teacher, but mostly as friend to friend, “What has happened to us now?  We don’t say things like that anymore.  We don’t have those high ideals anymore.”

Somehow you sounded down-hearted and depressed.  But the way you received my answer has made the conversation stay in my memory.  I said, “No, Rufus, you are wrong.  Perhaps we don’t make so much noise about our ideals, not nearly so much as we should, but the very fact that you and your classmates are here today shows that we do have respect for those ideals.  The fact that you stood together and read those words together and were so deeply moved by them shows that you young people understand and sympathize with – and share – those ideals.  The fact that we teachers gave our time to bring you here in the first place so that you might have an opportunity to read, to see, to feel the presence of the great men who have made your country great – and the fact that you cared enough to come – shows that those ideals are as much alive today as they were when Lincoln himself spoke of them.”

Your face brightened.  Our conversation lightened.  “I think I see what you mean,” you mused. Then together we recalled instances that proved us right: We do have those same high ideals today.  We just don’t talk about them, not nearly enough.  But “talking” is not the whole answer.  The school teacher in me began to assert itself and we explored another idea.

“Yet each of these artists is an artist because he expressed ideas and emotions common to the heart of all mankind.  Unless those who hear or see can feel those same emotions, want to express those same thoughts, then there would be no greatness in the artist. It is the response in the heart of one who stands in the presence of greatness that makes the man great.  Do you remember the quotation:  ‘Beauty is in the eye of the beholder’? So it is with greatness.

“Now I cannot write a speech as Lincoln did, nor hold a nation together by sheer will power and faith in my convictions, but because I can comprehend his greatness I can share in it – and to the extent that I can teach others to share in his greatness I can further experience that greatness.  We have only one Lincoln, it’s true, but we have many who share him and who spread his ideals because they have known him, have stood here where we stand now and felt with him the power of his convictions.  Everyone who can help others to share this feeling becomes a little of Lincoln himself. Everyone who vows here to do, better than ever before, his own little part in keeping our country great and strong by keeping faith with her ideals, everyone who works hard to keep this vow, becomes a part of Lincoln himself.  ‘I am a part of all I have ever met.’ Now you – now we all – are a part of Lincoln.”

Perhaps, Rufus, I did not actually say all those very words that day, but I have thought them many times, as over and over in my head I have tried to answer your question.

And now – three years later – I am here again as sponsor of another class, and I see another group of young American students just graduated from high school into a world of limitless opportunity. I see them stand where so many Americans have stood before them, and they gaze and wonder and read and pass on. This time as the group breaks up I walk out onto the beautiful colonnade alone to look again a long look at the city of Washington.  I think of the six students who were with us that other day and I wonder whether the experience that we shared that afternoon had even begun its work, spreading its influence through you to other lives, uplifting each of you from the common drudgery of work that must be done, to a vision of work that could be done to carry on the ideals of this great American who gave so much, who stood so firmly by his convictions of what was right.

School teachers have rather vivid imaginations, you know, and as I stand here I wonder whether that moment in the Lincoln Memorial could have influenced your lives. You made a decision to become a minister, and have already put that decision into action. Don went forward with a plan to become a math teacher – “a real teacher,” he says. Marian has entered into her liberal arts course with enthusiasm for every new experience, seizing every opportunity to try new things, to find the place she can serve best. P.T. was side-tracked for awhile but now I hear that he is going on with plans to become a law enforcement officer. Wayne made a brand-new decision to go to college.  Shelby made a more difficult decision to give up college, where he felt out of place somehow, and get into work where he can make a real contribution to his country, to his world. I am so very proud of all of you.

Yes, Rufus, I think of all these things as I stand here three years after my first visit to the Lincoln Memorial.  Then I thank God, who gave us men like Lincoln. I thank Him also for giving us men who could see a vision of what it could mean to the American people, and especially young people, to have before them in visible symbol this masterful figure of this wise, strong man, to be able to read from the permanent stone those words that have become engraved on our hearts as a part of our American heritage.  I thank God for the privilege of being a teacher of the fine young men and women who are fighting their way through the confusion of today’s world to the high ideals of the founders and preservers of our country.  I am proud that I am so clearly associated with these young people who now stand with me before Lincoln’s statue, who read his words, who turn to one another and ask, “Can’t we help to finish this work?” They find their answer in their feeling of renewed courage, in the inspiration of this one man who looks down on them in utter serenity and seems to say, “Of course you can do it. I am depending on you.”

They are leaving now to get on the bus. I must join them quickly, but I just had to pause here, Rufus, long enough to re-live that experience here with you and your five classmates – and to look ahead to what this day may mean to these young people, too.  You see, I think my life will always be richer because of these reflections while standing before the Lincoln Memorial, and I want to fix this moment in my memory and to share it with the former pupils who continue to inspire me.

Catherine remained a teacher in Tiptonville, TN until 1987 and in 1994 was one of the first three people inducted into the Tennessee Teacher’s Hall of Fame.  She still lives in Tiptonville, in the same house she’s called home for 74 years.  Catherine’s son Jimmy recently unearthed this essay and the award certificate in a box of other memorabilia.

Rufus Moore obtained a Doctorate of Theology from Southern Seminary and was a minister, an educator, and a Colonel in the National Guard.  He passed away in 2011.

Jimmy LeDuke
(I'd love to hear from you...feel free to comment below, or click HERE to send me an e-mail)
Posted by Jimmy LeDuke at 11:27 AM