A couple of years ago following one of my "much too short" visits to Mother's house in Tiptonville, I shared with Miss Catherine's family a typical day for our "Bubba." A vainer woman would be appalled at my sharing these "all too personal" details, but I believe Mother's many friends, former students, and even her younger family members will appreciate how well Miss Catherine has adapted to her "circumstances"; Remember her biblical motto: "In what-so-ever state I am in, therefore to be content." And for the most part she seems to be content. 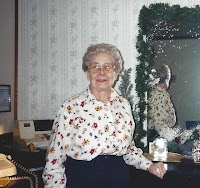 Mother's routine, two years after this letter was written to the family, has not changed too much.  She requires a little more assistance for some of the daily tasks, but her appetite remains fairly good and her disposition is still strong.  She still enjoys her twice a week trips to Lakeview for dinner; and while she is not always sure who is coming up to greet her, she retains that graciousness that allows her to say: "Well, I'm just fine, and how are you doing?"  Only after the visitor has left the table does she look toward Sue and says: "I think I should know that lady that just spoke to me, but I'm not sure what her name was."

A day in the life of Catherine LeDuke


The morning started off just the way the previous night ended; with a kiss.  I woke Mother at , as usual.  When her eyes opened she immediately leaned up toward me, wanting me to lean down and give her a hug.  I told her it was time to start another day.

Fairly quickly Catherine LeDuke rose up and began the ritual that I have learned is programmed into her now-feeble mind and body.  She slips into her red house slippers, puts on her terrycloth, white robe, retrieves her walking cane from the bedside spot where she leaves it each night, and heads out into the living room.

Instinctively she finds the chair next to the fireplace, places her cane on the floor to the right of the chair, and takes the inhaler which has been prepared for her and begins to “puff.”  Mother’s whole day is centered around “puffing.” She is supposed to use her inhaler every four hours and all activities are generally coordinated around this schedule.  Time is often given relative to when the next “puffing” is to take place.


Following the morning puffing session she usually needs no prompting to “put her ears in.”  I am amazed each morning to watch her remove her hearing aids from the large mouth jar where she keeps them at night.  The batteries have been removed and are loose in the jar, but she somehow manages to retrieve them and install them into the right, and then the left, hearing aid.


Once both are in place her first words of the morning are usually: “Now what am I supposed to be doing?”  This phrase will be repeated often during the day as she moves from activity to activity.  She is reminded to go into the bathroom and put her teeth in.  Mother has worn a partial upper plate since her college days, but she has always made it sound like she did not have a tooth in her head and until these later years none of her children even knew she had this plate.

Next she is directed to her chair next to the television set where coffee and a breakfast Pop-tart is brought to her.  After that will come the pill-taking.  She will reach behind her to the side table, top drawer and remove the pill box containing the week’s daily supply of AM pills, open the lid for that day’s pills (she usually needs some help with deciding what day it is), and dump them onto her breakfast plate.  A glass of water is most always present and the two-at-a-time routine takes several minutes.

Mother’s eyesight is not what it used to be, so some time is spent feeling around the edges of the plate to be sure she has gotten all the pills.  A few minutes later and one can hear, “Now what am I suppose to be doing?”  When told that she should go into the bedroom and get dressed she will quickly find her cane and head out for her next assignment.  Often a few minutes of napping take place before the dressing task is started.
Mother dresses herself in the clothes laid out on the end of the bed: socks, pullover blouse, and stretchy pants, topped off with her ever-present white sweater.  Often she then sits on the side of the bed until someone walks by and invites her to come back into the living room to begin her vigil in front of the television, though she is often not watching, just sitting.  Her dexterity with the remote control has failed her some time ago, causing her little concern since nothing ever seems to be of interest on television anyway.

Lunch time comes early most days, about .  Gussie has been busy cooking up a storm since she came in about .  Her plate is piled high, her lemonade glass filled, and when called she comes and sits at the end of the table where she has sat for all my years of memory, in this first and only house she has ruled over since 1939.  Grace is said with all the sincerity God would ask of anyone.  Her appetite has remained good, although she rarely finishes the full plate that Gussie has provided.  Several appreciative comments are usually made and, when finished, you can count on: “Now what am I supposed to do?”

A little more chair-sitting is required before the puffing can begin, broken up by a trip to the bathroom or maybe a very short nap.  Gussie is busy with cleaning up the kitchen so usually there is no one available to make inquiries of.  The most difficult time of the day I believe is the three and a half hours between the and the puffing.  Sue is often at her job as nurse practitioner at the local clinic, the TV offers little to occupy the afternoon, and Gussie makes great fried chicken but can be short on conversation.


One of my favorite pleasures is reading poetry to Mother.  I am so amazed at her ability to hear the first few words of a poem and then just take off and recite the next eight or ten lines with little or no prompting.  Occasionally, if the poem is unknown to her, her comment may be: “Well, that was very interesting.  I don’t believe I’ve ever heard that one before.”  She also seems to enjoy short stories, but may not always be able to follow the story line if it’s too long or too detailed.  Still, her ability to enjoy the written word, or the hymns sung in church, is either a testament to how many years she spent teaching English and faithfully attending church services, or to how deep her appreciation for poetry and hymns are.  Or both.

During my short stay here we often broke up the afternoon with a drive to the lake or river, usually ending up at the Dairy Queen for one small and one medium vanilla ice-cream cone.  Sometimes we went rabbit hunting.  That’s not quite how it sounds, as our “hunting” consists of taking a trip through the Airpark Campground at a very slow speed, hoping to scare up a rabbit or two from the roadside brush piles. Usually we can count on seeing at least two or three.  Fortunately Mother’s eyesight allows her to see things at a distance fairly well, and she is quick to point out the white cranes wading in the waters.

When we return from our adventure, more chair-sitting is in store as we await the late afternoon puffing session. It’s not a bad time for a short nap also.  Dinner time follows.  Soup and a sandwich seem to always be appreciated.  Occasionally a previous day’s “Gussie meal” may be available for a warmed-up left-over supper.  And, of course, at least twice a week she’ll have dinner out at the Lakeview Dining Room.

A Lakeview meal is the nutritional equivalent to Gussie-Cuisine: fried, plentiful, and a little spicy.  It’s always the same each time; the fish special which consists of three pieces of catfish fillets, coleslaw, hush puppies, and a dill pickle.  At 95 years of age Mother eats eagerly and appreciatively, so who’s prepared to question this diet?

If no afternoon trip was made, then a stop at the DQ might be in order.  Otherwise it’s back to the house for the Wheel of Fortune, Jeopardy, or the evening news. When finally arrives, bedtime preparations can begin.  “What am I supposed to be doing now?” can be answered with: “Why don’t you go on and take your teeth out while I get the puffer ready.”

One of her PM pills is very tiny, yet extremely important, and Sue has discovered that it has been misplaced more than once.  So to make sure that it is not missed that pill is taken out of the PM pill box and given separately each night prior to “puffing.” With teeth out, small pill taken, and puffing completed the day is fast coming to an end.

Mother retires to her bedroom, places her cane in the exact spot near the top of her bed, and begins to get herself ready for bed.  Sue will have already turned down her bed and arranged spare pillows to form a sort of bed rail.  A glass of fresh water is waiting on the night stand along with the PM pill box.  Mother will take these pills, put on her nightgown, and remove her hearing aids and their batteries.


A hug and a kiss bring another day to a close as Mother gets under the covers and turns off the light on the nightstand. 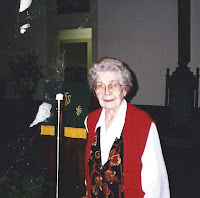 As for the Abounding Angels……..they’re everywhere.

You see, Sue collects them, so they are everywhere in the house: on the mantel, in the bedrooms, and on the walls.  But those are not really the ones I am talking about.  There are real angels all around.

Starting with the angel Catherine LeDuke herself.  Can there be anyone that ever came in contact with her that could not recount some act of kindness, deed of selflessness, or her sense of graciousness?

Angel Gussie comes to the house three or four times a week. She cares for, cooks for, and shows tender respect for Mother throughout the day.

The angels at Lakeview Dining Room go out of their way to show kindness and courtesy whenever Mother is there for a meal.

Angel Evelyn Norris makes mother feel special each week when she fixes her hair.  She can share stories about Mother that no one else is even aware of.

Angel Gene Canestrari and all the folks at Tiptonville Presbyterian Church welcome Mother to “her” pew each Sunday and provide her with her continued connection to her abiding faith. 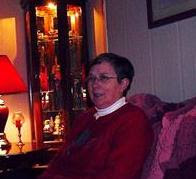 And the biggest angel of all: Sue Hurst.  There are no words to describe what Sue has meant to Catherine LeDuke.  In these last few years Sue has kept mother out of complete darkness with her caring and loving nature.  She has cared for mother on a daily basis and kept her active, partly by encouraging mother to “do things for herself.”  Sue has seen to Mother’s every physical, mental, and spiritual need.  Without Sue, Catherine would be no more.  For all those who love Catherine LeDuke, give thanks and pray for Angel Sue and all the other Angels who watch over her every minute, when God has his hands full.

Jimmy LeDuke (I'd love to hear from you...feel free to comment below, or click HERE to send me an e-mail.)
Posted by Jimmy LeDuke at 3:29 AM