Sometimes as the self-imposed Tuesday and Friday deadline approaches for this blogging adventure, I find myself completely at a loss for words.  I know, I know.  Some of you are thinking: "At last! The well has run dry."  But, fear not, I just have to dig a little deeper into the several boxes labeled: "All things Catherine" and viola!, magic happens.

Like this fat little envelope that I found buried in Mother's cedar chest.  You know, the cedar chest that I found her home-made wedding dress in a few months ago.  (I know Amanda will put one of those "linky things" in this paragraph so you can go back and see those recent pictures of Catherine holding that dress.)

This envelope holds several little "snippets" that I think some of you will find interesting; most all are related to the Patty-LeDuke wedding held on December 23, 1936.  The first is a sealed envelope containing rice.  I'm going to guess that this is the rice that I remember mother telling me about in 2007.  At that time her mind was still in pretty good working order and Amanda and I were working on our first book about James Neville and Catherine.  I asked her to tell me all she could about about her wedding and she mentioned that she and daddy were finding rice in their clothes well into January of '37.  I just bet she saved some of it and tucked it away with her dress.  I left the envelope sealed.

Then there is a short newspaper announcement of the wedding neatly cut out of a Memphis paper. 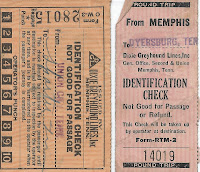 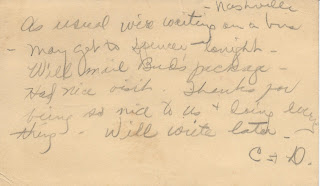 Tying these travel records together is a postcard addressed to Catherine's parents in Memphis.  As you can see written on the card they were stuck in the Nashville bus station for a while, but my guess is that even James Neville did not have any trouble controlling his frustration since he was with his new bride. 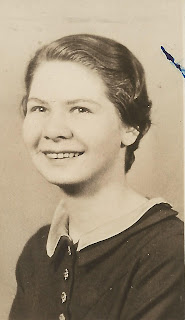 Oh, Yeah.  This picture of Mother was in the envelope.  One that I have not seen before.  She's not in a wedding dress, but I am guessing it's a 20 year old Catherine. 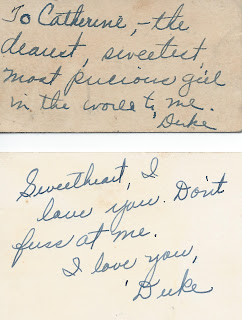 Then there are a couple of notes that James Neville must have included with boxes of candy or flowers.  Sounds like he had gotten in trouble and was trying to get out. 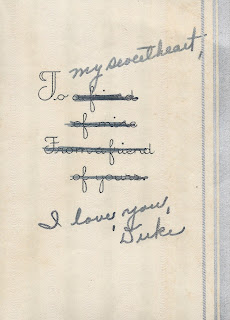 For Catherine's January 14, 1937 birthday James Neville mailed her a card with a box of candy from the Norris Exquisite Candy Company of Atlanta, Georgia.  I'll have to look them up and see if they are still in business around here.  James Neville had trouble finding an appropriate card so he scratched out the wording and changed it to his own liking. 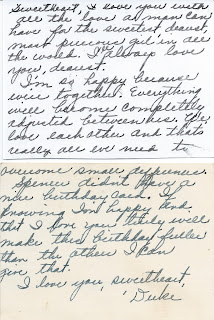 And then he put this note in the envelope with the card.

He must have gotten in trouble a lot 'cause he sure is awfully "sappy" with his note writing.

The most interesting find of all in this cedar chest envelope is the 1936 hotel bill from the Hotel William Len at 110 Monroe in Memphis, Tennessee.  It is made out to "LeDuke, James Melville and Wife."  The bill covers two nights; December 23rd and 24th at $3.50 per night; a whopping $7.00.  There is also a charge for 0.50 bringing the total to $7.50.  Maybe it was for a bottle of Dom Perignon.

When I talked to Mother in 2007 she could not remember the name of the hotel they had stayed at; she only remembered it was a fancy, Downtown Hotel.  I have previously reported that they were at the Peabody, but now I know for sure that it was the William Len. 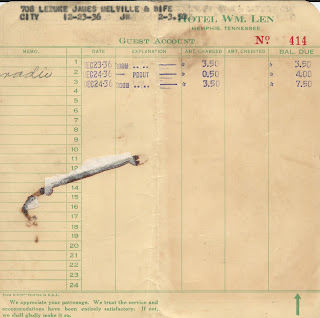 When Mother gave me the rundown on her memories concerning her wedding she ended our conversation by saying: "I remember when 'Duke and I came out of the church that night we had our first "real" kiss.  Martha and Shelton picked us up then and drove us downtown to a fancy hotel.  They let us out at the front door, drove off, then we went inside......and that's all I'm going to say about that."

Jimmy LeDuke (I'd love to hear from you...feel free to comment below, or click HERE to send me an e-mail.)
Posted by Jimmy LeDuke at 3:41 PM