I’ve been writing all my life; but only in bits and spurts.  Most of my writing has been related to some specific need at the time: a business report, a lengthy card to a friend, a written “lecture” to one of my daughters, an occasional personal letter, and many, many essays that ended up unrecorded on the wasted pages of my mind.

Only in the last few years have I come to realized that I have allowed far too many years to pass without serious effort being made to a more prolific approach to a so-so talent that I inherited from my parents; the gift of writing.  It is an art form that is quickly becoming extinct.  The written word should be put down on real paper and made available to whomever happens to stumble across it.

I know that I have some bit of talent because I choose to believe the occasional praise I get from a variety of people who have the good fortune to read my words in whatever form I have used.  Modesty, fortunately, is not a required trait for a writer; in truth it could actually be a hindrance unless one is only interested in being read by the heir to his filing cabinets.

While I have always been aware of my parents writing abilities I only recently was introduced to just how extensive their skills were.  While rummaging through the attic in my 97 year-old mother’s house fifteen or so years ago, I came across a metal box filled with letters.  The letters were all written by my father to my mother during a six-month period before they were married in December of 1936; 99 love letters written by a man I only knew as “Daddy.” Obviously a new image for my father was created rather quickly as I began reading.


My youngest daughter, Amanda, and I took his letters and with a small amount of research put together a 200 page book, printed by Kinko’s, and distributed only to family members.   The book contained about one-third of the letters reprinted exactly as written.  The remainder of the book was our re-creation of events as drawn from all the letters available.  Only a few letters found were written by my mother during their courtship and all were written prior to the time period of our book.


Before we finished our effort I undertook a thorough search of my mother’s house in hopes of finding her letters of this period.  What I found instead was an unbelievable treasure; a large trunk filled with over 1500 letters all written and postmarked between April 1944 and June 1946.  These letters were written by both my parents to each other, while many more letters included in the cache were written by family members and fellow soldiers.


As important as this find was it was not germane to the project we were working on at that time.  With no letters found written by my mother in 1936, we continued with our book writing but remained determined to write a sequel using the War Letters we had discovered.


Almost four years passed after making that vow before we began the arduous task of organizing, sorting, and then reading that mountain of mail.  I read through all 26 months worth of letters, writing monthly chapters as I went along while the reading was fresh in my mind.  After the initial sorting of the letters I discovered that Private James Neville LeDuke moved around quite a bit during the first 16 or so months of his imprisonment. 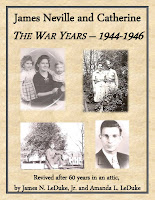 Quickly I realized the chapter divisions and their titles would be determined by geography.  I made 52 huge, blank desk calendars so that I could make notes about each of the daily letters; first a month of his and then a month of Catherine's.  In the margins of the calendars I would make special notes about the books they read and talked about; the movies, the radio shows, the special 1940ish sayings they used.  Our goal was to have the finished product be interesting to family members, friends, and former students, and at least "readable" to strangers who might happen upon it.


Both my parents were high school teachers and both were Latin majors in college which probably accounts for their excellent writing skills.  And while both sets of letters are extremely interesting to read, we have found that my mother’s letters have a particular style that is incredibly poetic.  She has a way of phrasing her thoughts that demonstrate her love for many of the great writers of English Literature.

Amanda was the first to recognize her unique, poetic style and quickly began to revise some of the first chapters I had written so that more of her letters would be included in their entirety.  An appendix was even added to give special recognition to specific poems she included in her letters as well as excerpts of paragraphs or whole pages of her own poetic phraseology.

Today my mother is not sure exactly who I am when I visit her, but that’s not a problem for me.  She is the writer of all these love letters I am reading today to a man whose name I bear.  She taught me well in the classroom and at home.  And I know that any skills I may have as a writer I owe mostly to her.  I only wish I could write a love letter with a more poetic touch so that I could do justice to this entire "blog" which I write to her.

You know, I truly wish my dear Mother could put her mind to work just long enough to come up with a better word than "blog."

If there is enough interest among our readers, we will begin sharing both these books with anyone willing to pay the "Kinkos" printed cost of a copy. Or perhaps we can figure out how to link folks to our computer files which would cost nothing. In the next few weeks we will be posting "teasers"; maybe one chapter at a time. Let me know what you think.


Jimmy LeDuke (I'd love to hear from you...feel free to comment below, or click HERE to send me an e-mail.)
Posted by Jimmy LeDuke at 10:01 AM