"I'm glad I touched shoulders with you"

I am continually amazed at how little I seem to be able to remember about some very important events in my life.  Like the death of my Father.  I just can't seem to pull out specific memories of the six weeks he spent in the hospital trying to recover from what should have been "routine" surgery; not that any surgery is really routine when they are "putting you under" and then cutting into you.

I think the reason that I have such a hard time is that I don't believe I fully recognized that daddy was ever in any real danger.  I can't even fully remember exactly what the nature of his surgery was.

I had been living in Atlanta for about five years, was enjoying a reasonably good career in food service, had two beautiful young daughters to occupy my weekends, and was selfishly unaffected by the lives of two of the most wonderful people I would ever know: my parents.  I was, I guess, busy with life.  And then Death appeared.

I knew Daddy was going to have surgery sometime in June of 1977; I may even have been in Memphis when he was admitted.  I remember vaguely that I made at least two trips to visit him following his surgery which was described to the family as being successful.  I won't even complete the punch line to this "old" joke as its humor does not exist for anyone in the family.

I remember how uncomfortable it was for me to see him struggling to talk with that vent tube down his throat.  He seemed to be desperately trying to convey something to me, but I recall being more concerned with trying to get him to relax and be quiet than I was in understanding his muffled words and his sign language.  It just never occurred to me that he wouldn't be better in a few days and then be back home watching "As The World Turns" on TV.  How stupid I was at 34 years of age.
﻿﻿


One thing I can remember clearly is how strong Catherine LeDuke was following the death of her Soul Mate.  She had 41 years with him but now, at my present age, I realize how much she was "cheated" out of at least another 20 good years with the love of her life.  She was a very young 61 years old in 1977.

﻿﻿﻿﻿﻿﻿﻿﻿﻿﻿﻿﻿I suppose I'm reflecting on all this because I just came across a letter that Mother wrote to family and friends a few months after Daddy's death.  I really was not joking when I told you people that I have boxes of "stuff" that I have confiscated from 114 LeDuke Street.  Every few days when I am running low on "posting" ideas I rummage through another box to see what interesting items I can find.

The following is the letter I found and then I will close this post with a poem that was included in a letter sent by Shug Landrum a few years ago.  (Click on Shug's name to visit the posting dated in October, 2009 for her entire tribute to James Neville and Catherine.)  I think the poem was intended for Mother but I believe it applies to them both.

~~~~~~~~~~~~~~~~~~~
﻿On June 27, James Neville had to have surgery – a V graft on the aorta and a bypass to the artery to his right kidney. The surgery was successful, I suppose, but the following morning he developed a condition called “Adult Respiratory Distress Syndrome”-- and although his lungs seemed to clear up somewhat he was never able to get away from the respirator. Other complications came along too and in spite of the brave fight he put up, he just couldn’t make it. An “acute myocardial infarction” was the immediate cause of his death early Friday morning, August 12.

His mind remained clear and his spirits were good. Although patience had never been one of his virtues, he endured with good grace the severe limitations imposed by his illness.
Fortunately, I did not realize the small chance he had of complete recovery. Because my spirits were high and because I could read his lips and be an interpreter, I was allowed to stay with him often during the day when he was not asleep and to help a little bit in caring for him even though he was in the intensive care unit the 6 ½ weeks at Wm. Bowld Hospital.

School started a week after I came back to Tiptonville. During that week Jimmy and his family from Stone Mountain, Georgia, and my sister and her husband from Central Washington were here and they helped me make the adjustment. Brother Bud came from New York two weeks later and stayed several days. [Letter damaged, unable to read the rest of this paragraph.]

There will always be a deep down loneliness but it is not my nature to sit down and mull over it – if there is something I can be up and doing, so I’ll pick up club meetings and Eastern Star and Delta Kappa Gamma just as I have already gone back to church and school. Friends here and letters from friends away are a great help to me, although, for my part, I am not much of a letter writer and I have found this letter so hard to compose that I am going to ask your indulgence that I have copied it to send to several friends who do not yet know of Duke’s death and who will want to be told these same details – and I ask indulgence from those to whom I send copies so that I will not have to write this again.

So many people loved Duke so much – he was someone special to each of them and to each one in a different and special way. No other so humble a man could have touched so many lives so very deeply.

I am enclosing clippings from the Lake County Banner --- 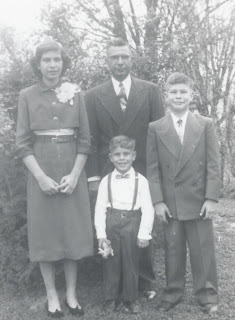 There's a comforting thought at the close of the day,
When I'm weary and lonely and sad,
That sort of grips hold of my crusty old heart
And bids it be merry and glad.
It gets in my soul and it drives out the blues,
And finally thrills through and through.
It is just a sweet memory that chants the refrain;
"I'm glad I touch shoulders with you!"

I am glad that I live, that I battle and strive
For the place that I know I must fill;
I am thankful for sorrows, I'll meet with a grin
What fortune may send, good or ill.
I may not have wealth, I may not be great,
But I know I shall always be true,
For I have in my life that courage you gave
When once I rubbed shoulders with you.

Jimmy LeDuke (I'd love to hear from you...feel free to comment below, or click HERE to send me an e-mail.)
﻿