My Bridge to Nowhere


Have you ever started one of those projects that seemed to not have an end; one that kept growing and growing until it began to take on a life of its own?  Well I am in the middle of just such a project. At least I hope I'm in the middle of it and not the beginning.

It all started innocently enough when Marty and I made our first visit to Gibbs Garden in Ball Ground, Georgia.  This is a 300-acre private estate that just last year opened to the public.  If you live anywhere near the north side of Atlanta and would like to stroll around an incredibly well-manicured, lush, colorful garden setting with streams and lakes and all manner of "nature stuff," well, this is a place you really want to go.

But.............beware!!!!!  Your spouse just may see something there that she really thinks would look good in your backyard and in a weak moment you might actually agree that you could build one of those "somethings." That's when the trouble begins.  That's when you might see your own "Bridge to Nowhere." 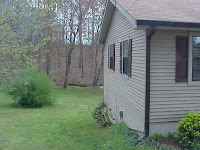 When Marty and I moved to the northside of Atlanta some nine years ago we bought a small house on a quiet road with few neighbors to contend with.  Our acre-and-a-half lot is actually only half that size because a small spring-fed stream cuts across our back yard and at least a third of our small estate is on the other side of the stream.  That whole area is steeply uphill, wooded, and useless; and in these last several years of drought conditions the stream has been waterless.  This overgrown buffer does, at least, provide us a good deal of privacy.

There is nothing picturesque about our stream.  It rarely has any flowing water to speak of except during a thunderstorm.  Weeds, fallen trees, muddy creek bottom, and poison ivy have owned a third of our property until.......................... we wandered into GIBBS  GARDEN and one of us realized the possibilities that existed just across the river in our backyard.

The first mistake I made as we stood on the 30' Pergola that spanned the small pond was saying: "Yes, a slightly smaller version of this might look nice going across our stream.  I think I could build this without too much trouble."  She-who-must-be-obeyed took me seriously and placed her order for a 20' long by 8' wide by 10' tall bridge/gazebo.  This event took place a little over a year ago.  Since then..........I'll just let a few pictures do the talking.

First came the two 6' by 2' deep foundation footings that required 75 bags of cement; one footing on each side.  On top of those is a 6x6 treated 8' beam that the bridge will rest on.  Note that the area in front of the beam in the picture needed 80 concrete blocks, each weighing 89 pounds, to erect a retaining wall.  At least I had sense enough to build the wall before I started the building process.  This was just the first of my project "growing pains" I encountered. 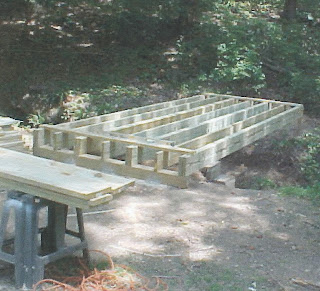 The bridge is supported by eleven, treated 2x10's each twenty-feet long.  Four of them are doubled up for extra strength.  One never knows when a road may be built carrying tractor trailers across. I wanted to be prepared.  The good thing is that I was able to get the delivery truck from the building supply company into the backyard so all the necessary lumber could be stacked near by.  Am I smart or what? 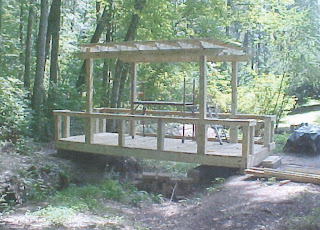 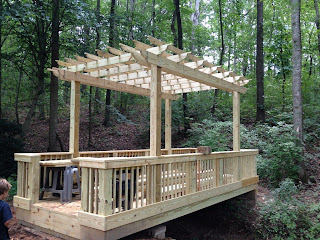 I'm not going to bore you with all the gory details of this building process, but I will brag about the fact that each and every board was carried, drug, pushed in place, lifted, leveled, and nailed by yours truly.  I came through this phase unscathed other than a few splinters.  I reached this point in the early summer when it occurred to Marty that it sure would be nice if there was some water under the bridge.  Soooo.... the project took on a growth spurt.


What Jimmy needed to do NOW was get four pallets of 87-pound retaining wall blocks and start digging a pond.  Yeah that's what I needed to be doing.  I mean what good is a bridge/pergola if there is no pond under it?  After all Gibbs Garden had water under ITS bridge. 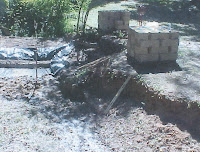 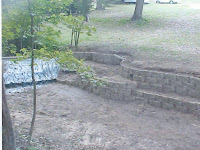 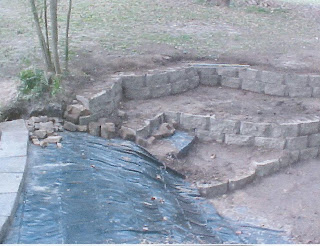 Now all we have to do is wait for the drought to end.  Or we'll just do a rain dance.  About the time I put the last block in place was the time my right knee gave out.  I can't imagine why.  I am still recovering and this project is not anywhere near complete.

There 's the patio area that belongs at the base entrance to the bridge, the steps and railings have to be put in down onto the patio.  The steps on the woodland side of the bridge that have to be built that lead down to "Nowhere."  The woods have to be cleaned out so that it will be as pretty as all the wooded areas around Gibbs Garden.  And the "Meditation Walk" has to be cleared through the woods.  And, And, And, And. 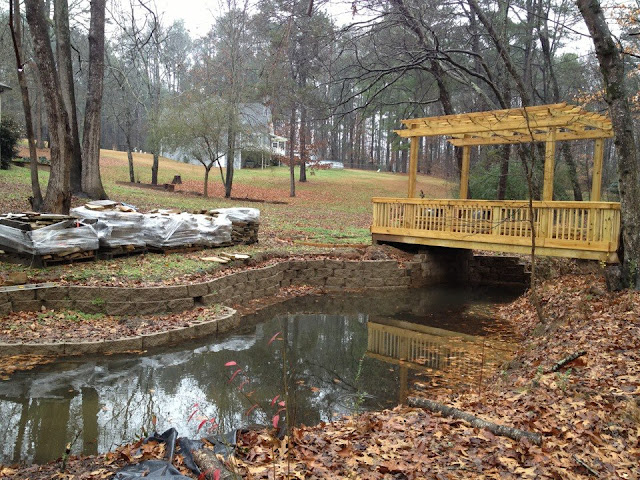 At least it started raining this fall and now the pond is full.  But did I mention that my dam building talents leave much to be desired?  Yes, the damn dam is leaking big time and I simply refuse to go out and stick my fingers in the several holes that seem to exist.

Oh well.  I'll just add that to my list.  This thing will never be finished anyway.  Those pallets you see in this last picture are six pallets of stone that I found at a landscaping place that was going out of business.  I picked them up for a song ("Ol' Man River"?).... probably sold back to them from some guy who went with his wife to Gibbs Gardens a few months before we did.